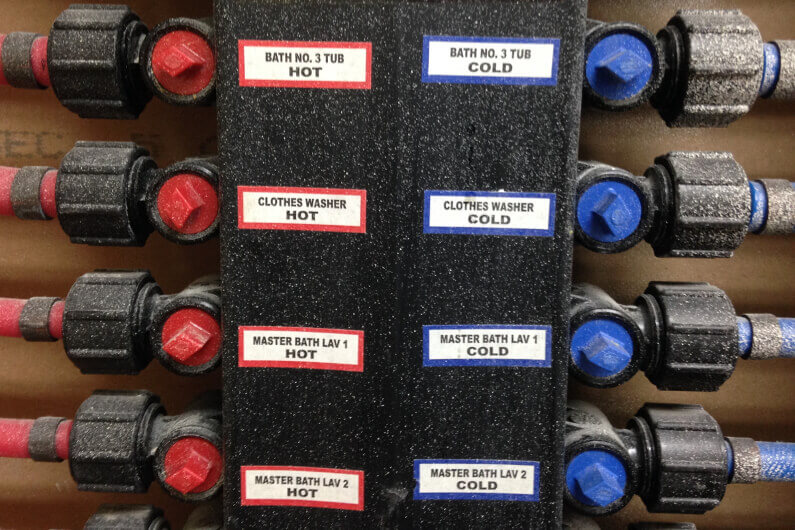 Did you know that household leaks waste more than one trillion gallons of water every year? This water wastage doesn’t just affect the environment, it can also cost home and business owners thousands of dollars.

The worst type of leaks is usually indicative of a broken plumbing system — things like cracked pipes or low water pressure. If you need to replace the piping in your home, then don’t panic.

PEX piping can be an affordable solution for people in a tough financial spot. In this article we’ll go over all the advantages of PEX piping. Which can help you decide if it’s a good fit for you. Let’s get started!

What is PEX Piping?

Before we can learn about the advantages of this type of piping, we should first take a look at what it is. PEX piping is a version of polyethylene that is combined with cross-links.

The material has a variety of usage, from domestic water piping to high voltage electrical cables. PEX piping was made in the 1930s, but it wasn’t until the 1980s that it started being used widely for plumbing usage. The material is often used in place of popular PVC, CPVC, and copper piping.

The reason why PEX piping began being widely used in plumbing is two important reasons: it resists chemicals easily and it insulates temperature. But that’s not the only reason why it’s a good fit for many homes.

In this section, we’ll take a look at five important benefits that come with using the piping material in your home or commercial building.

The biggest problem with metal plumbing is its rigidness. This fact means that the metal material requires lots of straight lines to be installed. While this might not be a huge problem for smaller projects it can quickly add up when used on larger ones.

It’s also incredibly inconvenient for tight buildings without much space. PEX on the other hand is bendable. This means that it can simply curve around potential roadblocks that might block its way.

The flexibility that comes with PEX can also help increase pressure in pipes.

Because the elbow joints used in traditional piping causes turbulence at each transition. This results in a drop in water pressure, which means weak water flow in showers, sinks, and toilets.

Many contractors greatly prefer PEX material because it’s easier and quicker to install. The piping can be made in larger pieces since it’s more flexible and requires fewer fixtures when hanging it.

You can make connections with PEX simply by placing the material together and then using a compression fitting or adjustable wrench. Metal pipes on the other hand require either torch to solder the pipes together or messy glue to make the connection.

This soldering is not only work-intensive, but it can also pose a potential first hazard which makes it not as safe. The fact that it’s quicker to install means that plumbers or contractors will charge less since they don’t spend as much time or energy setting it up.

3) Not as Likely to Burst in Cold Weather

Frozen pipes are one of many signs that you should consider replacing your pipes immediately. When the frozen water in these pipes expands it can cause rigid material to burst open.

The severity of the burst can range from annoying leaking to full-on flooding. PEX piping on the other hand expands with the frozen water. On top of this PEX is also a non-corrodible material which means minerals or moisture don’t build up and cause rusting.

This adds a level of durability that doesn’t come with material like copper piping. If you don’t want to replace your pipe system, then you can try heating your pipes. You do this using these methods – but keep in mind that this can be expensive too.

4) PEX is Easier to Retrofit

Don’t assume that you need to replace your entire old pipe plumbing system with PEX piping to reap the advantages. If parts of your old metal system still work well, then you can gradually retrofit the old metal pipes with new PEX.

This adds a level of convenience because you can simply replace the problem sections in your home as they break down. We recommend retrofitting for individuals with larger houses that are on a tighter budget.

However, keep in mind that this requires close surveillance of your current system. We wouldn’t recommend waiting for a pipe to burst to replace it as water damage caused by this issue can be just as expensive as replacing the old plumbing.

5) It’s More Affordable Than Other Options

Perhaps the most popular reason many people prefer PEX piping is the affordable price of the material. The piping material can often cost 25 percent of what it would take to install an alternative.

So why does PEX cost so little?

As we mentioned before, part of this relates to the flexibility of the material. Since it can maneuver easily around corners the piping doesn’t require elbow joints at every turn like copper pipe.

Another reason is the price of copper: one New York Times article found that it nearly quadrupled in value over the past four years. When you factor in the high cost of these parts, plus the additional labor needed to install them, then you can see how the bill quickly stacks up.

We hope this article helped show you all the advantages of PEX piping instead of traditional metal material. If you have any more questions about the piping material, then make sure you get in touch with Plumb Time.

We’re a company based out of the Columbia South Carolina area that can provide a variety of expert services. Whether you have an emergency plumbing situation, or simply require some maintenance, we can help. If you’re tired of your home’s inadequate plumbing system, then visit our site today!